Gas turbine blades have to resist severe conditions such as elevated temperatures, high centrifugal forces and oxidation. Nowadays directional solidification (DS) and single crystal (SX) methods are used to cast the blades because conventional casting methods create superalloys with unsatisfying high-temperature properties caused by the equiaxed grain structure. Conventionally casted superalloys failed at the grain boundaries because of thermal fatigue, oxidation and creep. Grain boundaries are places for failure initiation. The alignment or elimination of these improves creep strength and ductility at high temperatures. To cast turbine blades is very complicated. Simplified, a mould is made by pouring a ceramic around a wax model of the blade.

Then the wax model is removed and the mould is filled with the molten metal. Directional solidification (DS) The directional

solidification of superalloys was introduced in the sixties.The grain boundaries are aligned parallel to the solidification direction which coincides with the principal stress axis of the component. A final structure is produced which consist of columnar grains with <001> orientation in the direction of the afterwards applied load. DS turbine blades with the low modulus <001> orientation parallel to the direction of the applied load increase the thermal fatigue resistance drastically compared to conventionally cast turbine blades.

The process is shown in Figure 32. Single crystal casting is executed in vacuum in a preheated, ceramic mould. 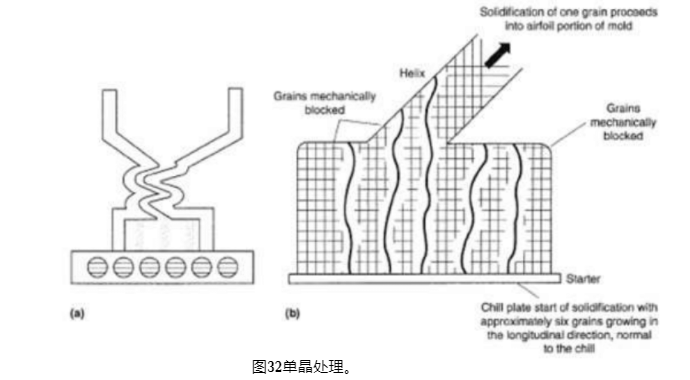 Because of the controlling of the solidification in the mould, the growth of all grains can be inhibited and therefore grain boundaries are eliminated. The mould is solidified from the bottom. At the beginning of the solidification the grains have a columnar structure which is perpendicular to the thermal gradient. When the helical channel is reached all columnar grains except one are prevented from growing. At the end of the helix a single crystal is produced. Single crystal superalloys possess better high-temperature properties than DS superalloys because of the fault of grain boundary strengthening solutes such as boron and zirconium. The missing of these elements increases the incipient melting temperature of the superalloy and thus the high-temperature properties are improved.

Moreover the alloys can be heat treated at higher temperatures in the range of 1240–1330° C. This higher heat

treatment temperature allows a dissolving of all g´ and finer precipitates after the aging treatment.

One of the most prevailing components in the aerospace equipment that used investment casting process to produce superalloy castings is used in Jet engines. Fig. 33 (a) and (b) shows the layout of the Jet engine, which consists of compressor, shaft, combustion chamber, turbine and exhaust nozzle. The distribution of pressure and temperature inside the Jet engine is shown in Fig. 34. The temperature level reaches the maximum in the combustion chamber.

Due to the distribution of temperature and pressure in Jet engine; Fig. 29 shows the alloys and the location of these alloys in the jet engine. It is noticed that Ni base superalloys are positioned just behind the combustion chamber in 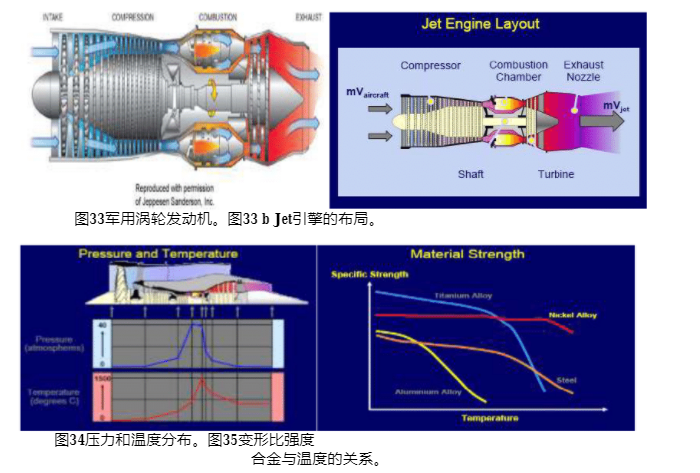 The blades are fixed to a disc which is connected to the turbine shaft. The working temperature is much lower as the temperature of the blades. The blades must have a very good fatigue resistance. As material can be used polycrystalline materials because the turbine discs do not have to have a resistance against creep deformation. Discs normally are produced by casting and then forged into shape. But casted discs contain some segregation which decrease the fatigue resistance. To improve fatigue resistance the recent discs are made with powder metallurgical processes, displayed in Figure 36. 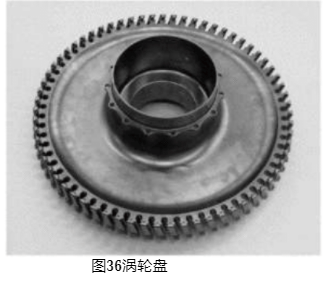 Investment Casting process is applied to produce special Nickel-based superalloy castings that are used in load-bearing structures to the highest homologous temperature of any common alloy system (Tm = 0.9, or 90% of their melting point).

Among the most demanding applications for a structural material are those in the hot sections of turbine engines. The preeminence of superalloys is reflected in the fact that they currently comprise

The turbocharger, shown in Fig. 37tional air into the engine. Consequently a larger quantity of fuel, which is burned, can be used. The device contains a turbine which works with exhaust gases from the engine. Up to 150000 rotations per minute are possible.

Because of the exhaust gases the temperatures are very high and the conditions for oxidation are excellent. Therefore the material for

turbochargers must have a high fatigue resistance as well as a superb resistance against oxidation. 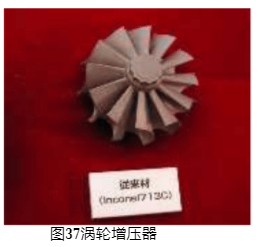